March 14, 2017 – What does pay equity have to do with domestic violence? A lot! Economic stability and security for survivors is crucial to long term safety and independence.

Join LCADV and LaFASA as we advocate for survivors at the Louisiana State Capitol!

June 2, 2014 – The 2014 Legislative Session has come to an end. It was an incredibly productive session for domestic violence legislation. Thanks to the efforts of advocates across the state, all FIVE priority bills passed the House and Senate unanimously and will become law. These bills include HB 747, HB 750, HB 753, SB 291, and SB 292.
Another bill, SB 233 by Sen. Weston Broome, would have provided housing protections to victims of domestic violence. Unfortunately, this bill failed in the House. Want to know how your representative voted? You can see it on the How They Voted When It Mattered page.

May 6, 2014 – This week, the package of five bills strengthening protections for domestic violence victims moved closer to becoming law. House Bills 747, 750, and 753 have passed the House and Senate unanimously and are on their way to the governor’s desk. Senate Bills 291 and 292 are awaiting final passage by the House of Representatives. This is an incredible victory and a giant step forward for the state of Louisiana. Thank you to all of the advocates and legislators who have worked tirelessly to get these bills passed!

Join us for Purple and Teal Day at the Capitol

April 10, 2014 – Join LCADV and LAFASA for a rally against domestic violence and sexual assault. Purple & Teal Day at the Capitol will feature speakers, exhibits, and advocacy for survivors. Meet us on the Capitol steps April 16th at 8:45 a.m.! 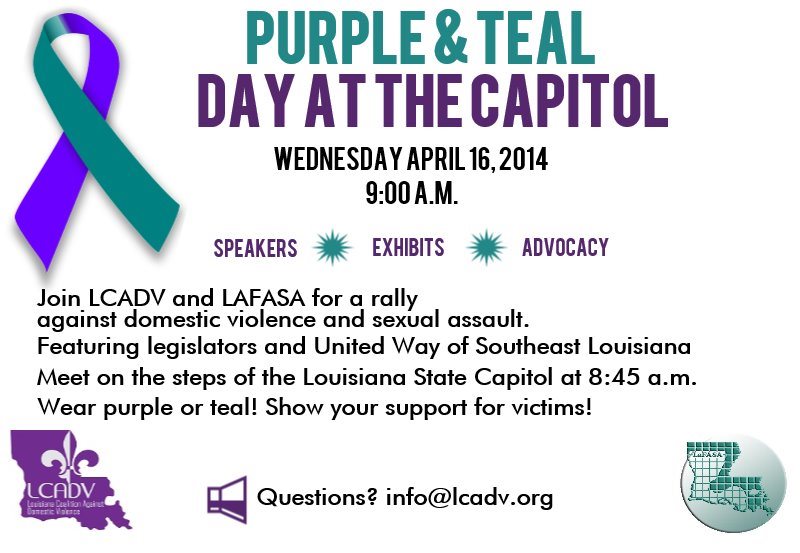 April 3, 2014 – Today the Louisiana House of Representatives passed HB 747, HB 750, and HB 753 unanimously! They showed amazing courage in voting for these bills which have the potential to save lives. These bills now have to be passed by the Senate as well. When they are scheduled for committee we will update you.

April 1, 2014 – Today the Louisiana State Senate passed SB 291 and SB 292 unanimously!  We are grateful that the state senators have taken a stand to support victims of domestic violence. These bills still have to pass the full house and they will need your support. For a summary of these bills and others that are pending, download the Priority Legislation Talking Points 3-29-14. Please ask your Representatives to support House Bills 747, 750, and 753 which will be heard by the full House on Thursday, April 3rd.

This guide discusses strategies for the reduction of domestic violence homicides in Louisiana. 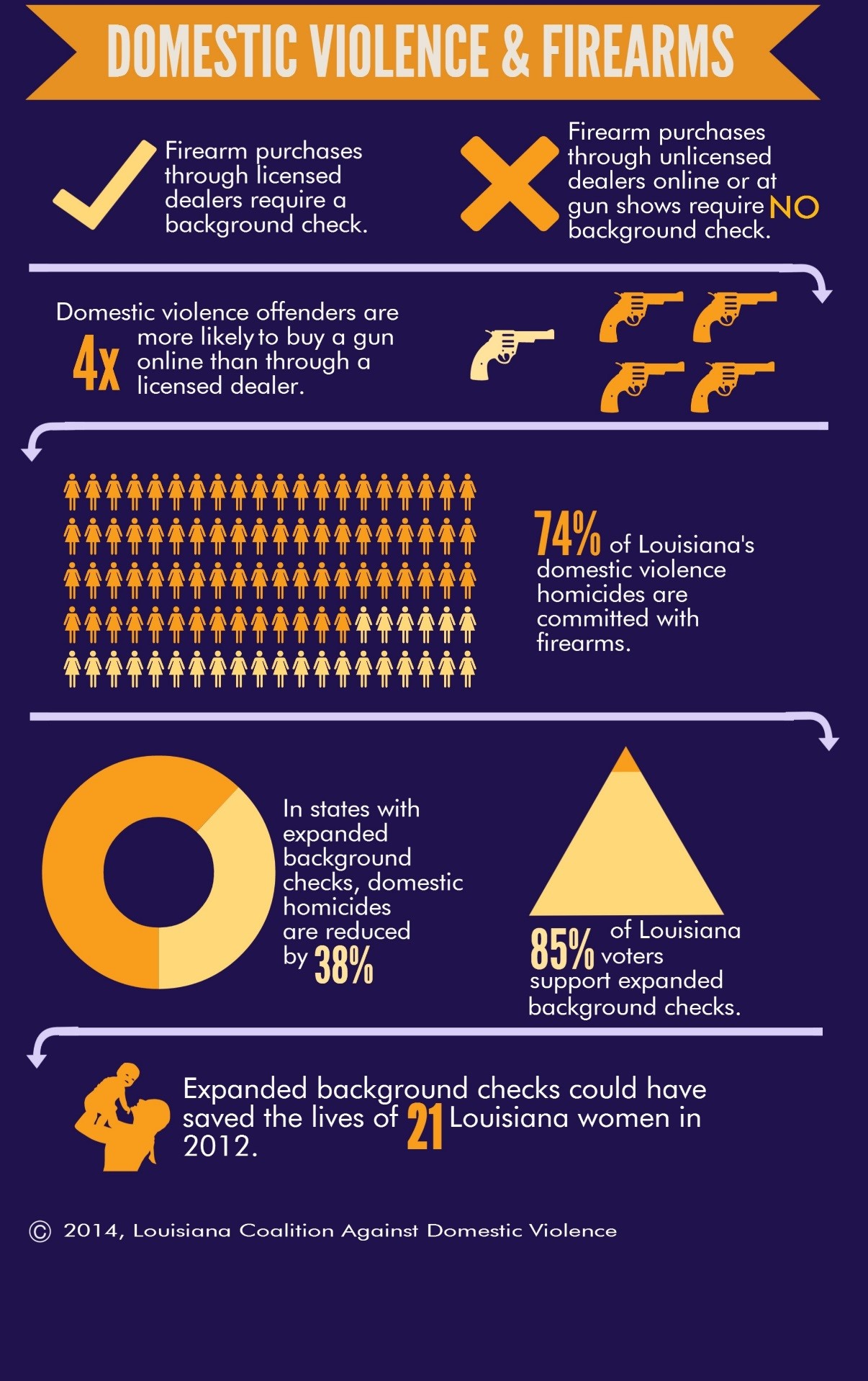 Baton Rouge, La. – As bills poured in to meet the pre-filing deadline for the 2014 legislative session in Louisiana, several emerged that will create significant changes to the domestic violence laws here.  Most notably a package of bills introduced by New Orleans lawmakers Representative Helena Moreno (D) and Senator JP Morell (D).

The Policy Committee for the United Way of Southeast Louisiana, or UWSELA, is leading the efforts to create reform.  They have been working for months with a broad group of allies to gain support for the legislation.  The relationship between UWSELA and domestic violence advocates was forged last year when the UWSELA were critical supporters in fighting the budget cuts to domestic violence programs.  Those cuts were eventually averted by the legislature.

Beth Meeks, Executive Director of the Louisiana Coalition Against Domestic Violence credits that experience and some high profile homicides this year for stirring the public.  “I think after the budget battle and then some of the events last year, people were angry.  People are tired of women and children being disposable.  This does not reflect the values of Louisiana.  We are a strong family state and these women felt like someone needed to take a stand, rightly so.”

Louisiana consistently leads the nation in domestic homicides and has done so since 1997.  LCADV tracks these homicides and says from 2010 through 2012 there were 178 deaths due to domestic violence.  74% of these were committed with firearms and 37% of the offenders had a prior history of domestic violence or other violent crimes.  There were 16 multiple victim incidents resulting in 35 deaths, practically all of which were committed with firearms.  The murder rate of women in Louisiana, most recently measured at 40% higher than the national average, has been twice the national average in recent years.

“If a virus was killing people in Louisiana at a rate twice as high as the rest of the nation we’d declare a public health emergency.  Every leader would be working around the clock to stop it.  Why don’t we have that sense of urgency about the murders of our mothers and wives?”  Meeks questioned.

Some of the proposed legislation tightens laws holding offenders accountable for violence against their families.  Others will likely be a tougher sell, including some seeking to restrict an abuser’s access to firearms.  Meeks is optimistic that constituents and lawmakers can get behind the measures, “I trust the people of Louisiana to love their neighbors and their families enough to understand what we are asking for.  We’re simply saying if you are a person who is willing to assault your family you don’t deserve a firearm.”

A poll conducted by Schoen LLC and released less than a year ago showed the vast majority of Louisiana residents support comprehensive background checks on gun purchases. At the time pollster Doug Schoen said, “That 85 percent of Louisiana residents want every gun buyer to pass a criminal background check speaks volumes about the changing public mood on guns.  This margin is unlike any I’ve seen on this issue, and it marks a real sea change. Voters want their elected officials to fight gun violence, and after Newtown, they’re demanding it.”

Meeks believes lawmakers can be counted on to stand up for victims.  “Some of these deaths were family members who tried to intervene and save a relative’s life.  We owe them something in return.  They were brave enough to give their lives, we should be brave enough to pass a law.”

For additional information on domestic violence, or to learn ways to get involved, please visit www.lcadv.org.

The Louisiana Coalition Against Domestic Violence (LCADV) is a state wide network of battered women’s programs, other organizations and individuals who share the goal of ending violence against women and children in Louisiana.  LCADV empowers its members through advocacy, education, resource development and technical assistance.